Short summary: The engine ran on Ethanol/LOX, O/F about 1.95, thrust nearly a metric ton and we got a (measured!) ISP of about 232s at a chamber pressure of 21 bar… which is quite a good number! We pushed the chamber pressure further, but ended up with a molten nozzle (for optimizing combustion, short burning times are sufficient… so we only use mild steel nozzles at this state of the tests). More below… 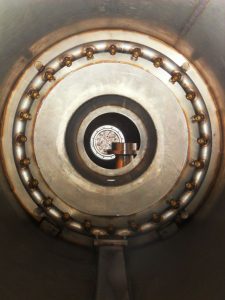 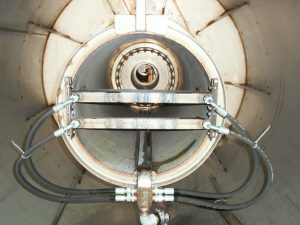 Some history: Some months ago we further modified our test stand to improve the sound suppression of the sound suppressing tunnel to be prepared to test the new 10 kN engine. For this we added a water injection ring into the movable tube in which we fire the engines. This cools the tube and reduces the noise level about 10 dBA:

(At the end of the tube you can see the injector with removed nozzle) At the downstream end of the tube we additionally mounted a pair of water cooled wedges. They produce a shock in the supersonic exhaust, slowing down the gas speed to subsonic. This reduced the sound level for nearly 20 dBA!. Now we can fire our 10 kN engine even at night 😉 This was also used in the silos of US-ICBM’s and is covered in several patents like US5422443.

Then we fired the engine the first time (The date in the movie is wrong). Ignition happens at the time 15:40:30. In the upper right frame you see starting the water injection into the tube prior ignition

We noticed a poor O/F of about 1.0 and found the source of the problem in a collapsed LOX-Filter upstream of the LOX-main valve. We removed it and fired the engine without it yesterday.

We increased the chamber pressure further and further and finally hit the limit what the steel nozzle can handle: High speed video with 600 frames/s.

The nozzle showed some nice patterns of molten metal: 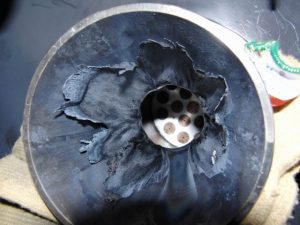